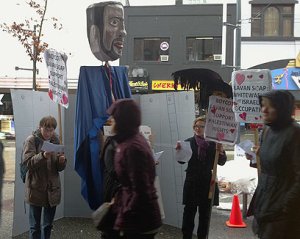 Canada in 2012: Jews fearing for their lives. Sickening:

Anti-Israel activists are stepping up their activities ahead of “anti-Israeli apartheid week,” whose organizers have pledged will see operations against Israeli establishments worldwide.

One of the cities already plagued by such activities is Vancouver, Canada. Israeli Shanni Bar-Oz, who owns a store carrying Israeli-made toiletries in down-town Vancouver, says the alarmingly growing rate of protests by anti-Israel activists, has her fearing for her safety.

During the last bout of rallies, she recounted, people arrived at the store to target her personally: “They were shouting anti-Semitic slogans like ‘Heil Hitler.’

“On the first day (of the protests) one of my employees called me in tears – there were dozens of people standing outside the store and shouting. They had a doll in the image of Lieberman and one of a vulture. It was horrible,” she recalled.

The protesters do more than just block the entrance to her store – they distribute flyers of anti-Israeli propaganda: “It wreaks havoc on my business reputation. I have to explain to my clients and my investors why I’m under attack.

“I’m very proud of being an Israeli, but it’s not easy” she told Ynet. “I’ve become an ambassador of sorts – I keep having to explain Israel to people, but all I do is sell soap.”

Bar-Oz contacted the Jewish leadership in Vancouver and informed them of her plight. “I asked for their help because I’m all alone here. I have no one else to turn to. I told them I feel like I’m exposed on the front line.

“I really feel all alone here. I’m a sitting duck and I don’t feel safe,” she added.

One response to “Shocking Jew hatred in Vancouver”