UN Watch today called on Ban Ki-moon, US Ambassador Susan Rice and EU representatives to condemn the world body’s “revolting and absurd” decision to unanimously re-elect the Assad regime to a senior post on a decolonization committee charged with upholding fundamental human rights in opposing the “subjugation, domination and exploitation” of peoples — a propaganda victory now being trumpeted by Syria’s state-funded SANA news agency.

Iran’s ‘Plan B’ for a nuclear bomb 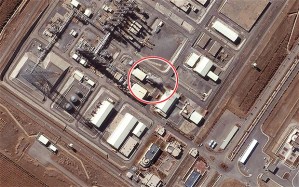 Iran is developing a second path to a nuclear weapons capability by operating a plant that could produce plutonium, satellite images show for the first time.

The mullahs’ regime, in the midst of an unbridled infighting for power and fearing an outburst of popular uprisings especially with the sham presidential elections approaching, has resorted to increasing executions and setting up gallows in public. This inhumane regime, with at least 45 counts of executions in just five days, has set a new record in crimes and brutality.

Today’s leftists like the high life as much as their demonized conservative rivals do. The more they damn the bad “millionaires and billionaires,” apparently the less guilt they feel about living it up in Palm Beach or Aspen — paying no taxes, offshoring their profits, or wearing Rolex watches.

The vast growth of the federal government has splashed so much big money around New York and Washington that even muckraking progressives can’t resist. Loud redistributionist rhetoric offers the necessary vaccination shot that makes privileged leftists immune from any criticism — or guilt — over indulging in tax avoidance, billion-dollar speculation, or aristocratic tastes.

George Orwell long ago noticed the same thing: In Animal Farm the pig elite loudly damned reactionary humans even as they sought to copy them by walking on two legs.

The first part discusses how Palestinian “refugees” are treated in Iraq. The following two segments deal with Syria and Lebanon.

The potato famine happened in the 1840s, when nearly a third of Ireland’s population fled to the United States. Imagine if instead of granting them citizenship the US had labeled them “refugees” who had to live in specific areas called “refugee camps”. Now imagine if this continued until the early 1900’s and the children and grand-children and even great-grandchildren of these refugees were still denied citizenship. That’s exactly what’s going on in the Arab world.

When burqas become accessories to crime

As David J. Rusin points out in his detailed survey of these crimes, Muslim garb holds two great advantages over other forms of disguise. First, plenty of covered women walk the streets of Philadelphia without criminal intent, thereby providing cover for thieves; the more head coverings around, the more likely it is that head coverings will facilitate criminal activity. Second, the very strangeness and aloofness of these garments affords their wearers an extraordinary degree of protection. As in other cases (notably a farcical purchase of alcohol in Toronto liquor stores by a 14-year-old boy in a burqa), clerks so fear being accused of racism or “Islamophobia” that they skip established methods, such as asking a niqabi to establish her (or his) identity.”

FSA and Hezbollah inch toward war

Recent clashes between members of the Free Syrian Army (FSA) and Hezbollah militias across the Syrian-Lebanese border have raised the specter of a regional spillover of the Syrian war, with Lebanon once again being caught in the crossfire.

The threat of war was raised Wednesday by FSA Chief of Staff Brigadier General Salim Idriss. In an interview with Al Arabiya Idriss gave Hezbollah 48 hours to cease its military operations in Syria or face attacks on its installations inside Lebanon.