“It just opens up the door for traffickers to use these kids to commit crimes and exploit them even worse.”

It is sad to see the foreign policy of the United States being carried out in such gasping, feeble whimpers. But it is no longer surprising. The last two weeks have been a microcosm of the failures of the last eight years. They will not soon be forgotten, or the damage quickly undone.

I hate the term political correctness, the way in which speech that is found to be unpleasant or offensive is often banned from universities. Which is exactly where speech that is potentially hurtful and offensive should be heard.

The way we demonize comedians for use of language or terminology is unspeakable. Because that’s exactly what comedians should be doing, offending and upsetting people, and being offensive. Comedy is there, like art, to make people uncomfortable, and challenge their views, and hopefully have a spirited yet civil argument. If you’re a comedian whose bread and butter seems to be language, situations, and jokes that I find racist and offensive, I won’t buy tickets to your show or watch you on TV. I will not support you. If people ask me what I think, I will say you suck, and that I think you are racist and offensive. But I’m not going to try to put you out of work. I’m not going to start a boycott, or a hashtag, looking to get you driven out of the business.

The utter contempt with which privileged Eastern liberals such as myself discuss red-state, gun-country, working-class America as ridiculous and morons and rubes is largely responsible for the upswell of rage and contempt and desire to pull down the temple that we’re seeing now.

I’ve spent a lot of time in gun-country, God-fearing America. There are a hell of a lot of nice people out there, who are doing what everyone else in this world is trying to do: the best they can to get by, and take care of themselves and the people they love. When we deny them their basic humanity and legitimacy of their views, however different they may be than ours, when we mock them at every turn, and treat them with contempt, we do no one any good. Nothing nauseates me more than preaching to the converted. The self-congratulatory tone of the privileged left—just repeating and repeating and repeating the outrages of the opposition—this does not win hearts and minds. It doesn’t change anyone’s opinions. It only solidifies them, and makes things worse for all of us. We should be breaking bread with each other, and finding common ground whenever possible. I fear that is not at all what we’ve done.

OTHER TOPICS COVERED IN INTERVIEW 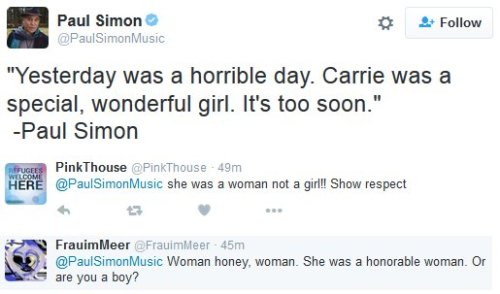 Posted on December 29, 2016 in Uncategorized